We are in the thick of wedding event season and we’ve still got two to go. And what shows they are!

But first lets get all nostalgic and reflect on the shows we have done…..

Our stand had its debut at the luxury wedding event at the Hilton in Leicester…….but I forgot to get the camera out at the Hilton, so this is at Dovecliff Hall……but you get the jist 😉 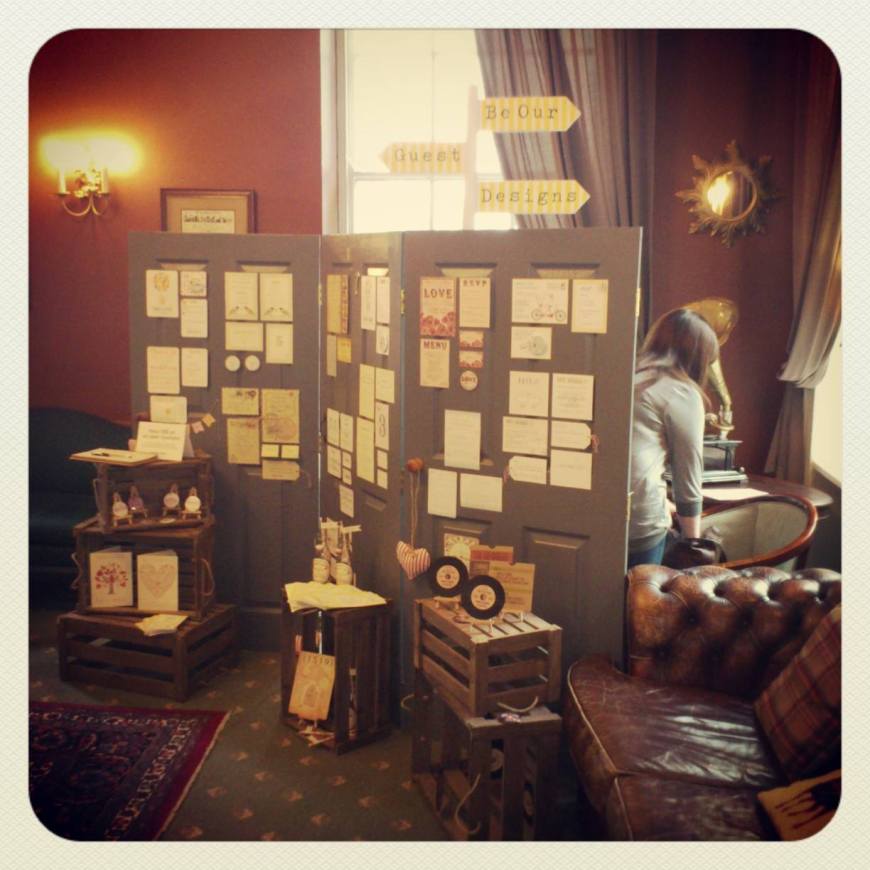 Everybody wave to Hannah in the background, “Hi Hannah!”. We love our new stand, we wanted to move away from the traditional trestle table with table cloth and we feel we’ve managed to do that with a bit of individual flare, even if we do say so ourselves. Also we can add lots of new doors to the screen for when we take over the stationery world, mwha ha ha ha! One of the winners of the shows and very popular designs is our vinyl disc invitations. We love the surprise and look on people’s faces when they realise that they are a burnable CD. 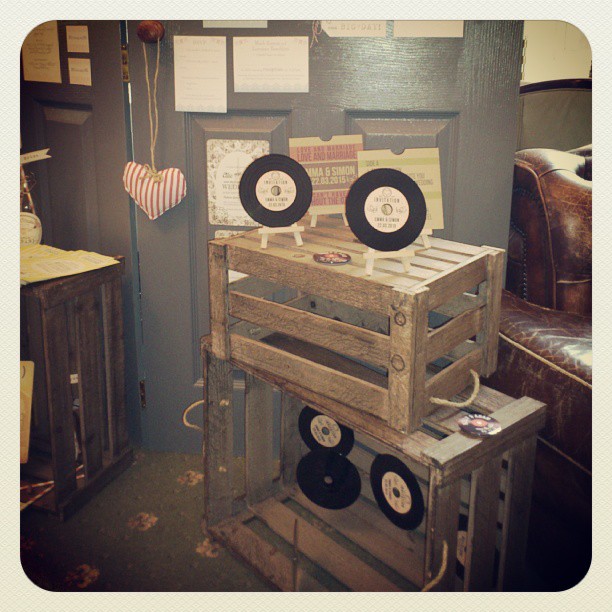 Our photostrip save the dates were also at hit at one of our favourite venues, Alrewas Hayes when we exhibited there in September.  Brides loved the idea of using existing photographs of themselves with their beau, letting us do the hard part of making them look like a photobooth strip without even having to grace a photobooth.

As mentioned above, we also exhibited at Dovecliff Hall Hotel. This is a lovely house with 12 bedrooms and a lovely orangery to tie the knot in. It also has the best decor and furnishing, including this awesome sofa that unfortunately wouldn’t fit in our car 😦 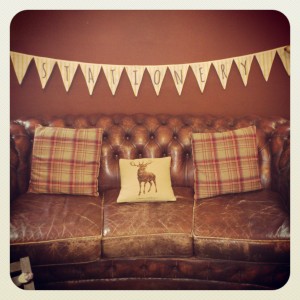 So that’s three down and two to go. This Sunday 20th October we’re at Osmaston Park. This is a wedding venue with a twist as it is a large marquee in large grounds where Osmaston Manor used to stand. Unfortunately Osmaston Manor has been demolished but you can look out and make use of the palatial surroundings for your wedding day. The Giant wedding show is well…..as you’ve guessed it, a giant wedding show! With around 80 exhibitors it will give you the chance to meet with lots of fabulous suppliers and see this unique venue in all it’s glory.

On Sunday November 3rd we’re just a little bit excited to be showing at the ‘wedding show with a difference’. Their mantra is don’t be a wedding sheep and if you are looking for something away from the wedding norm, we would love to see EWE there! With some of the most individual suppliers in the industry, geeks, goths and Bohemia are the norm here and it’s destined to be an amazing show with different and individual ideas. The Eclectic Wedding Extravaganza is set to be just that, an extravaganza as it is also set to be held in one the most modern and stylish venues in the Midlands, Fazeley Studios in Digbeth, near Birmingham’s trendy Custard factory.

Now, I’m going to finish this post with something that I never thought I’d actually ever write……..we, us, Hannah and I are only one of Rock My Wedding‘s official recommended suppliers! If you’ve never heard about RMW and you’re a bride to be, you need to get your little tush over there and get involved. It’s an amazing wedding blog full of inspiration and general wedding musings. It was invaluable when I was planning my own wedding and I have to admit, over 12 months after my own wedding, I still visit these pages nearly every day. For Be Our Guest Designs to be given the RMW seal of approval and to be included in their Love, Lust, List supplier directory is a real milestone for us. So thank you team Rock My Wedding!

So on that note, I’ll leave you with your diary, where in theory you’re penciling in the last two remaining show dates to come and see us 😉

Error: Twitter did not respond. Please wait a few minutes and refresh this page.